Someone who isn’t me 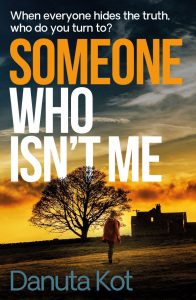 A young detective, Andy Yeatson, working undercover in pursuit of a major drugs smuggling gang, is murdered and dumped in a sluice gate in Sunk Island, a remote and empty landscape east of Hull. His boss, Mark Curwen, an ambitious and sometimes unscrupulous detective, sees this death as a chance to get his promotion. He decides to use Becca to flush out the gang. In doing this, he creates the impression that Becca is working as a police informant.

Becca and Andy were, briefly, lovers. He didn’t tell her he was a police detective. Now she is struggling to come to terms with the fact that he lied to her, and the fact that she is trapped working in low-skilled jobs and can’t get out. Her usual source of help, her foster-mother, Kay, is distracted by a house move to an old, dilapidated property on Sunk Island, close to her new job supporting drug users in Hull. Someone plans to get rid of Becca, and has no qualms about hurting anyone that might be close to her. Becca is thrown on her own resources to protect herself, the people and things she cares about, and her own life as the gang come after her with lethal intent.

Someone who isn’t me was published in April 2021 and is available from your local bookshop, or from Amazon in these formats: Paperback, Kindle and audiobook.